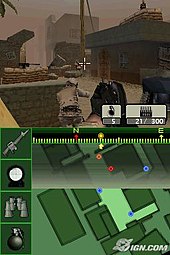 While most of the action takes place on the top screen, the bottom screen provides top-down view of the level and a compass with the objective location, while a UAV provides real-time radar scans of friendlies as well as enemies. The stylus is primarily used to aim weapons with precision detail, but players can also use soft buttons to select different weapons/grenades, toggle ADS (aim down sight), mount emplaced guns, and perform any mini-games on the screen.[7]

As a first-person shooter, Modern Warfare puts the player in the role of various professional soldiers, with a focus exclusively on combat. The game offers a variety of real-world weapons and vehicles, including the M16A4, the AK-47, and the Uzi. The majority of the missions are ground-level infantry combat, but there are several missions in which the player mans a turret in an aircraft or Humvee.

The player looks around and aims the currently equipped weapon using the touch screen. On foot, the touch screen is also used to switch and reload firearms, switch to grenades, and interact with the game world; the directional pad is used to move and the shoulder buttons fire the current firearm.

To utilize unique features of the DS, this version includes several touch-screen features, including hacking terminals and bomb disarmament. Inventory controls and an overhead map and radar are located on the touch screen. The DS offers local multi-player via built-in wireless, but does not offer the online multiplayer central to the console and PC versions.[8]

The game takes place in several settings, including the Middle East and Russia, during a fictionalized conflict involving a coup in an unnamed Arab nation.[9] The game features twelve single player levels in its campaign, as well as several multiplayer modes including deathmatch, team deathmatch, and capture the flag.[10] Multiplayer supports up to four players and uses both multicard play and download play.[11]

The DS version of the game, as is standard for a Call of Duty title, allows the player to assume the roles of several soldiers, who are either affiliated with the British SAS (Snowman) or the U.S. Marines (Cpl. Zach Parker). Unlike the console and PC versions of the game, players do not directly influence the outcome of the war, but instead take part in missions that occur during the events of the main game, with a focus less on the main attempts to end the conflict and more on the supporting role of various other soldiers.

The game begins with Parker undergoing remedial training at a Marine outpost in the Persian Gulf, before the camp comes under attack from military forces loyal to Khaled Al-Asad, who has just seized power in a coup. Parker and the survivors evacuate and fight their way to a nearby city where they lay the groundwork for an invasion. Meanwhile, SAS units raid two ships in the Bering Strait carrying supplies and nuclear material intended for Al-Asad, learning from captured documents that he is receiving assistance from ultranationalists engaged in a civil war in Russia.

Parker's unit is diverted from the attack on Al-Asad's capital city to hunt down the "Bagman", an associate of his with extensive knowledge of his trafficking network. The Bagman is captured, and reveals that a senior Ultranationalist named Petrovich is responsible for sending military aid to help Al-Asad plan his coup. The SAS goes on a mission, with Snowman providing sniper support, to raid Petrovich's safe house in Russia, and he is captured and interrogated, revealing the existence of a previously unknown military base and airfield where the Ultranationalists have been building up their forces.

On behalf of Russia's civilian government, Snowman and the SAS level the base with an AC-130 Spectre gunship providing support, recovering additional documents that indicate that the Ultranationalists are in possession of nuclear weapons. A raid is authorized on an abandoned industrial complex converted into a storage and transportation facility for nuclear bombs. One of the bombs is damaged and begins to detonate, but Snowman is able to disarm it in time.

The SAS and Marines form a joint task force after learning that Ultranationalist leader Imran Zakhaev has taken over a nuclear weapons base and is planning to launch warheads at the United States. Parker provides covering fire from the air and witnesses the launch of two missiles before joining a squad of Marines and SAS operators in a race against time to abort the launch. Ultimately, he manages to destroy one of the missiles in flight while the other is destroyed by a different squad, and helps secure the rest of the base's nuclear arsenal. While the squad makes their escape, Parker's vehicle is destroyed, and he obtains a new one in time to reach the extraction point before holding out long enough for air support to reach his location. The game ends with news that Zakhaev has been killed.