Moorhuhn is a German casual game franchise for PCs and various other platforms. It consists of more than 30 games, the first of which – a shoot 'em up – was Germany's most popular computer game in the early 2000s.[1] The first titles in the series were released as freeware. Since 2003, the games were released as "Crazy Chicken" in English, and some as "Chicken Hunter". 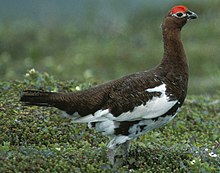 The original Moorhuhn game (now distributed as Die Original Moorhuhn Jagd) was developed by the Hamburg-based Art Department advertising agency and the Dutch Witan studios as an advertisement for Johnnie Walker whisky in 1998.[2] Imitating the Glorious Twelfth, the game's objective was to shoot down in the Scottish Highlands, through a point-and-click interface, as many cartoonish "swamp chickens" (German: Moorhühner; literally "moorhens", i.e. willow ptarmigans) as possible in 90 seconds. The game was originally known as KippenSchieten and won third place at the Bizarre 98 programmer's meeting.

The game was originally not intended for distribution, but was made available in autumn 1998 to play on laptops in bars by promoters dressed up as hunters.[2] It was since then illicitly copied, and became widely available for download on private websites.[2] The publisher's initial irritation at this subsided after the game received favorable mentions in popular media and demand for it grew. From the beginning of 1999, the game was officially made available for download by Art Department.[2] It became wildly popular in German-speaking Europe, to the point of being denounced in the media as a threat to the bottom line of businesses, on account of the number of hours wasted by employees playing the game.

The game's success spawned a great deal of merchandise, a comic book series, an animated TV series,[3] several motion picture scripts (although no movie was ever made) and a BMG-produced single (Gimme more Huhn by comedian Wigald Boning).[3] It also caused Germany's authoritative Duden dictionary to include the word "Moorhuhnjagd".[1][4]

In the sequel Moorhuhn 2, the player also has 90 seconds to shoot down chickens to gain as many points as possible, but other animals can be hit as well. Moorhuhn: Winter-Edition is a remake of the second game, set in winter. Moorhuhn 3 ...Chicken Chase takes place by the sea. Moorhuhn X from 2003 takes place in the countryside again, the surroundings are generated in 3D and the chickens perform animated motion sequences instead of simply flying around. Moorhuhn Wanted takes place in a wild west setting, and chicken can shoot the player. Moorhuhn Remake celebrated original the Moorhuhn's fifth anniversary, featuring enhanced graphics and new music.

In the Moorhuhn Invasion, the player shoots at alien chickens that have invaded Earth. Moorhuhn: Approaching is an arcade side-scrolling shooter with 17 levels. Moorhuhn Pirates is a classic shooter again. In modern operating systems most early Moorhuhn games are now unplayable, with the exception of the first game, the second game and the Director's Cut. For these systems, Moorhuhn Deluxe was released on Microsoft Store and Steam, as a remake of Moorhuhn X. Moorhuhn VR is a Moorhuhn X variation for mobile devices, in which players can look around in 360 degrees.