The storyline of Shrek the Third is based on the film. Shrek has to find Artie to have him serve as King of Far Far Away, while Prince Charming attempts to storm the city, and take the throne by force. Players can play as main characters from the film, including Shrek, Donkey, Puss in Boots, Princess Fiona, Fiona's cousin Arthur, and Sleeping Beauty. The game consists of 20 levels, some of which branch off from the main story of the movie, and features both single-player, and multiplayer play. These features vary based on the console. 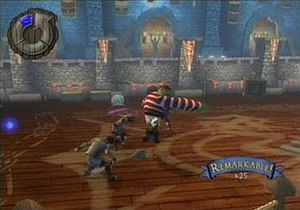 There are 6 characters the player can play as, all 5 of the movies' main characters, Shrek, Donkey, Puss in Boots, Arthur, Fiona, and one of the supporting characters, Sleeping Beauty. Puss in Boots is the only character that can double jump. The Gingerbread Man, King Harold, and Pinocchio are voiced by their movie actors.

There are 20 levels in Shrek the Third. The levels are highly linear, with side paths containing rewards for the completion of mission-style quests (three or five) and easter eggs such as an appearance by the (Penguins) from the Madagascar film. After completing a level, the player is awarded bonus Far Far Pounds, the game's currency used for purchasing items in the gift shop. The difficulty setting multiplies the bonuses obtained.

There are numerous boxes, barrels, and other smashables scattered around the levels. Most contain fairy dust for use in special attacks, but a few contain coins and food. Coins are of either gold or red colors (called Far Far Pounds). In addition to the aforementioned smashables, a source of Far Far Pounds can often be just finding them scattered around, as well as under certain circumstances, enemies. Gold coins are worth 3 pounds and red coins are worth 10 pounds. The player has to fight with fists and swords against multiple enemies, like pirates, guards, athletes, evil trees, and witches, depending on the level the player is in. After an enemy has sustained several hits, a finishing move can be used on them, which, when activated, plays an animation of the currently selected character finishing off the enemy, defeating them instantly, as well as causing them to drop special purple fairy dust. Felled enemies will drop fairy dust that will fill up the three-part special attack meter.

There are 6 minigames in Shrek the Third. Playing them does not affect the main game (that is, no bonus Far Far Pounds are awarded). By obtaining a high enough score after each game (the amount varies depending on the game), three different medals are awarded; bronze, silver and gold (in order from lowest to highest).