The player character — de Blob — starts out as a ball of clear "water". de Blob is free to roll around and collect paint from Paintbots in the three colors of red, yellow and blue, which can be combined into green, orange, purple and brown. de Blob then merely has to touch a building, lamppost, billboard, or other object for the entire surface of said object to be smeared in his current color. As he colors the city, the game's soundtrack, featuring live bands which recorded slow and fast versions of each "lick" (each hit), gradually adds more instrumentation as well as an additional "layer" of sound corresponding to de Blob's current color—being red usually adds a saxophone solo to the music, for example.[10] As de Blob collects paint, his size increases to a maximum of 100; each object he paints costs a paint point, as does attacking enemies, while touching water makes de Blob remove his color. 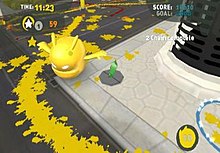 de Blob wanders Chroma City, spreading color and life at the request of a surviving Raydian.

While de Blob is free to paint, there are various missions which can or must be completed. These missions are given by various members of the Color Underground and include painting certain buildings certain colours and transforming a landmark with enough of a certain color of paint (for example, 30 yellow paint points). Each of the 10 levels have a main landmark to paint, which may require more than one color and more paint points than usual.

There are various hazards to avoid, however. Pools of ink turn de Blob black and cause him to lose paint points constantly; when he loses all of his paint points, he loses a life. Ink must be washed out with water. The INKT forces, Inkies, will send out foot soldiers to stop de Blob, as well as other forces—handheld ink guns, turrets, tanks, jetbikes and even Inkies that are immune to all but a specific color. There are also other hazards, such as hotplates, electric plates and spikes.

As de Blob paints Chroma City and completes missions, points are accumulated. Each gate separating the player from the next part of a stage can be opened by reaching a certain number of points. Once the final gate is open, the stage can be completed.